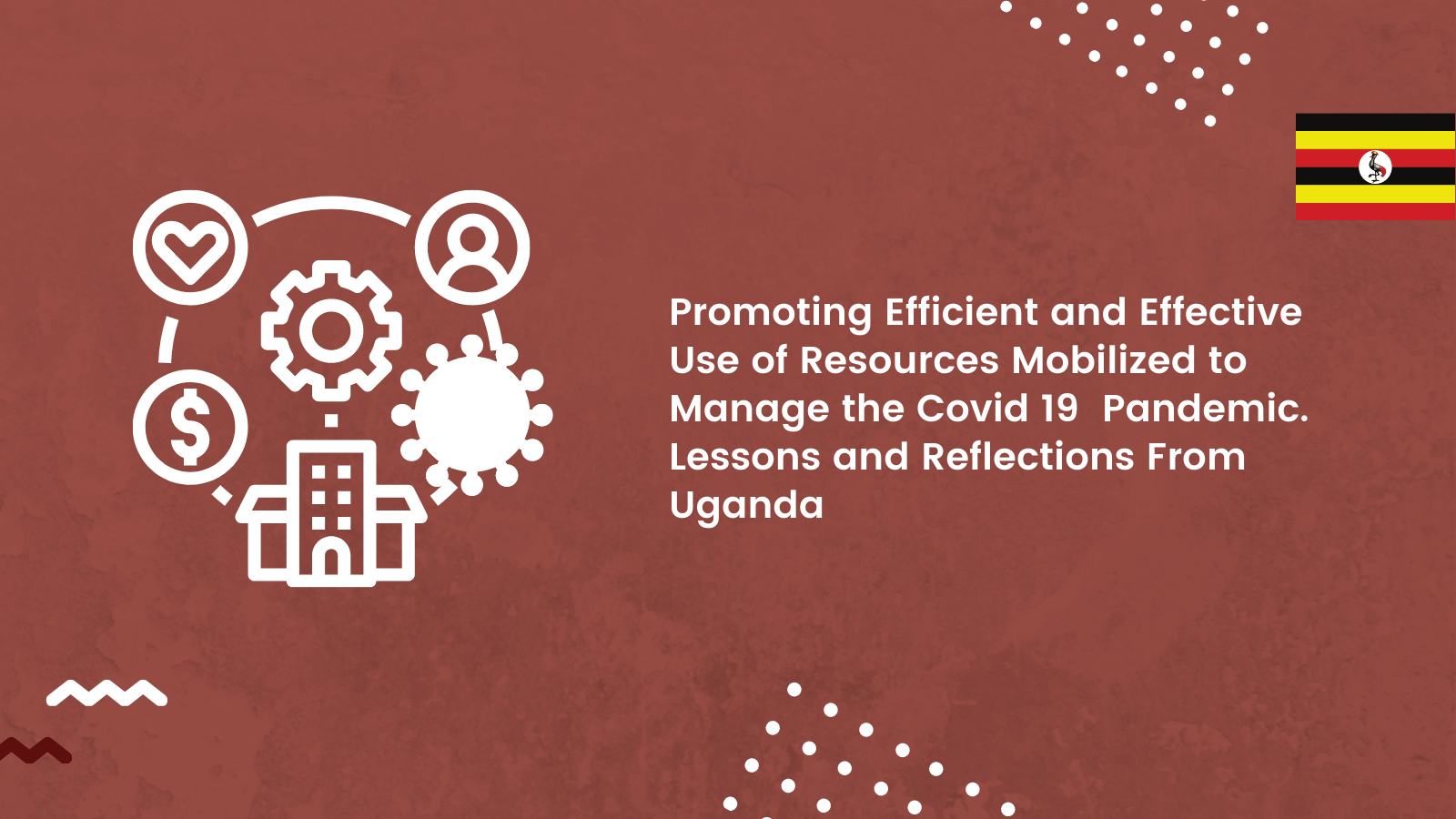 The  WHO has been pushing for a whole of Government approach and whole of society approach in responding  to the COVID-19 pandemic. Indeed, in Uganda the COVID-19 pandemic resulted in an overwhelming need for resources that could not be met by the Government of Uganda alone. Government therefore called for support from citizens, Non-Governmental Organizations as well as development partners. The response was impressive especially at the start of the pandemic. The national presidential address on COVID-19 often ended with the President reading a long list of donations.

We noted that there were three main kinds of contributions: those given in kind, those  presented as cash and those provided through different international financial agreements. The Government of Uganda received cash from  development partners and non-governmental institutions and from the IMF which allowed resource constrained countries to borrow funds for COVID-19 prevention and management  through its rapid credit facility. The IMF approved  a loan of USD 491 million dollars to Uganda. This raises several questions. Was one type of financing model better than the other in such an emergency? Why did people and institutions choose to give cash or in kind? Would any challenges be encountered in allocating and utilizing the resources received? How were decisions going to be made to allocate these resources? How can we make decisions during such pandemics more effective and efficient? These are the questions that we reflect on through this blog.

What influenced the type of financing models/donations utilized in the fight against COVID-19.? International agencies such as the IMF have inbuilt mechanisms for protecting the vulnerable and promoting economic recovery during global emergencies. With regard to COVID-19 they have supported countries through emergency financing, providing grants for debt relief, debt service suspensions as well as adjusting existing lending requirements. They also considered factors such as the country’s debt service record, and capacity to pay back. With regard to the local resource mobilization efforts, responses to resource requests may be influenced by the preferences of the actors requesting for resources, as well as priority needs. In Uganda one of the key actors was the President of the country. During the presidential addresses, he emphasized the fact that vehicles would be required to transport patients and therefore there was a need for more vehicles. Many people responded by donating vehicles and ambulances. Similarly, the need for protective equipment for the health workers was often emphasized by the Ministry of Health and her partners and hence there was also an impressive response towards providing protective equipment for those who were taking care of patients who had tested positive for COVID-19 or other at-risk populations. Correspondingly, there was a need for materials such as water containers, soap and sanitizers, required for the implementation of the COVID-19 prevention measures, hence these items were also commonly donated.  At the beginning of the pandemic, the country went through a lockdown period, hence people were not able to work and those without savings or who had lost their sources of income were in a precarious state. There was a real need for food and indeed many groups donated food items such as Posho and beans. On the other hand, there may have been concerns about whether intended beneficiaries would actually benefit from cash donations, especially in  a country rife with corruption.  This may have influenced the decision to provide items in kind rather than in cash. However, availability of the goods could have also contributed to in-kind donations, for example, companies that produce mattresses or water containers are likely to have found it more convenient to just provide the goods.

What guided decision making around the allocation of the resources?  According to existing literature, resource allocation decisions during pandemics are often based on factors such as  equality, degree of need and vulnerability, capacity to benefit  as well as those tasked with saving the lives of others, provision of services that benefit the affected populations.

The main factor that was considered during the allocation of resources were the requirements for the detection, prevention and management of the pandemic as well as population need. The Ministry of Health and other ministries involved in the response were asked to provide a budget which was then vetted by the parliament. Activities such as the purchase of oxygen, diagnostic tests and protective equipment, as well as recruitment of epidemiologists that were urgently required for a successful response were given priority. Equally those in need were prioritized over those with less need. For example with regards to food, those residing in slums were prioritized over those who did not reside in the slums. When the country distributed masks, those residing near the borders were also given first priority. With regards to the PPEs, health workers were prioritized over those who were not health workers. However, final decisions about how much to allocate to the different prioritized activities appears to have been rather adhoc.

What challenges were encountered when distributing the resources? Whereas goods in kind may be less amenable to misuse through corruption, they are also likely to have raised some challenges in terms of storage and distribution. For example, a decision was made to collect food centrally before distribution. This could have been done to promote accountability and to reduce misappropriation of the food. However it may also have been done to reduce chances of opposition politicians gaining mileage through their distribution given that the country was soon to have elections. Central collection, of course, required storage facilities, which in some cases could have been even more expensive than some of the food donated. There was also the issue of transporting the food to be distributed. Eventually government used its vehicles to distribute the food which was a good use of these assets which were not in use during the lock down. The centrally controlled distribution process therefore delayed the distribution of the food and yet the need was critical and immediate. Similar restrictions were encountered with the use of monetary contributions. The money was supposed to be sent to the distribution center first and then distributed by the center. This is reported to have discouraged contributions from those who were locally based because it was going to delay their ability to benefit from the funds more over there was even the likelihood that they might not benefit at all from the funds or goods donated. Immediate use of the funds donated to manage the pandemic was  further complicated by the need to follow  the lengthy procurement procedures laid out in the country’s public procurement regulations. Although a central task force was set up to receive donations, accountability for the multiple donations received was still difficult because funds were provided through multiple sources at the same time all over the country.

How can we make allocation systems more effective and efficient during such pandemics or disasters?

Implementation Plan: To enhance efficient use of the resources during disasters there should be a well thought through implementation plan for utilizing the resources that are borrowed or received. Such plans need to ensure that both short- and long-term investments are put in place to manage the pandemic. Whereas short term investments may focus on purchasing the resources required, long term investments should promote activities such as local manufacture and development of diagnostic tests as well as nationwide expansion of critical care facilities through the purchase of the relevant equipment and training of appropriate human resources.

Include contextually relevant frameworks for allocation of resources in pandemic management plans: Several frameworks are available for guiding resource allocation during emergencies. The frameworks  should provide contextually appropriate guidance on how allocation should be done depending on factors such as  the  type  and amount of resources, context , the type of emergency, the stage of the pandemic, populations affected. These frameworks should consider both utilitarian concerns  that seek to promote the achievement of the best possible outcomes as well as social justice considerations that seek to ensure that those at the bottom of the pyramid who are often most afflicted stand to benefit.

Fair resource allocation process: Countries should  ensure that the resource allocation process is fair by ensuring that  resource allocation decisions are made by an inclusive  team that is able to consider the viewpoints of different populations. Secondly they should have ethical guidelines that can ensure that existing resources are directed to the most vulnerable rather than the more privileged or along ethnic or socioeconomic divides. Thirdly they need to have easily accessible transparent and inclusive accountability systems that engage the public to provide continuous information about resources and how they have been distributed and utilized. Such a system should also have mechanisms for receiving feedback from the public and implementing the feedback received. Clear and transparent criteria for prioritization can promote trust in the health system and improve public response to the pandemic.

Uganda attempted to implement some of these suggestions. For example, the Ministry of Health had a dashboard for recording donations to the ministry.Donations were also read out to the public during the presidential address and presented on media outlets by the Permanent Secretary of the Ministry of Health. Uganda also set up a multidisciplinary team of individuals who were tasked with the responsibility of distributing the resources donated.

Reduce government bureaucracy. Government guidelines should be cognizant of emergency situations that require immediate action. Hence, they should allow some requirements to be waived during emergencies. For example, the need to send all donations to the center before they are utilized by the local governments and the need to go through the entire public procurement system that takes months before any procurement is done.

Promoting Efficient and Effective Use of Resources Mobilized to Manage the Covid 19 Pandemic. Lessons and Reflections From Uganda