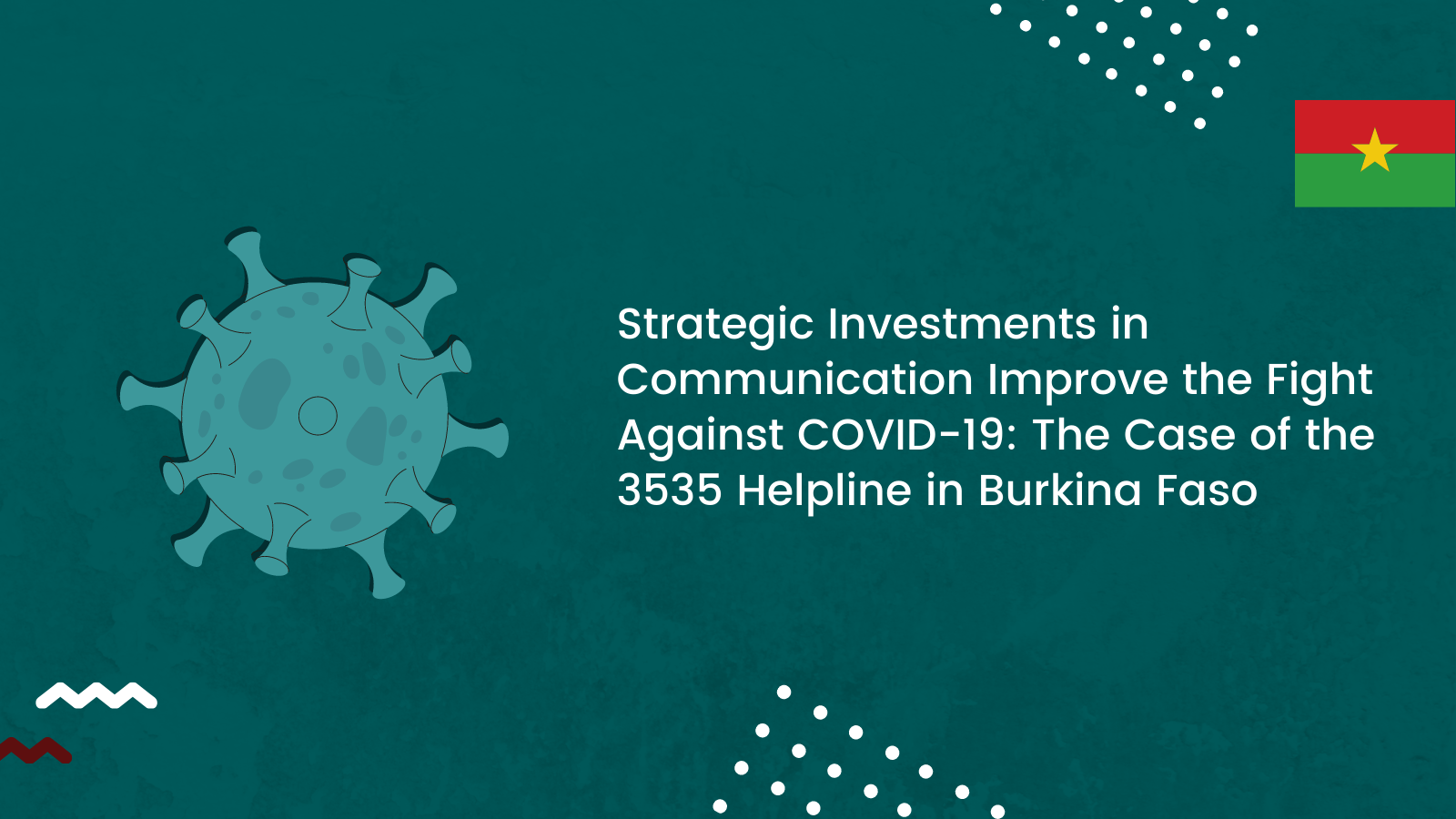 Communication is a key component in the response to COVID-19. At the beginning of the epidemic in Burkina Faso, a helpline was set up to allow the public to alert the community of suspected cases and contact cases. This helpline was a key part of the communication system around the disease, initially with tens of thousands of calls per day. But this number dropped considerably after a few weeks. In this blog post we look at the possible reasons for this decline and, more generally, the importance of investing well in communication strategies about the disease.

The first cases of COVID-19 were recorded in Burkina Faso on 9th March 2020. Initially considered by the majority of the population as a “disease of the Western countries” that could not withstand the heat of Burkina Faso, and/or as a “disease of the rich” affecting a certain elite, until the new coronavirus just crossed its borders. As part of its health response plan, the Ministry of Health set up a warning unit and a single call centre for the whole country, in the capital Ouagadougou. This centre was initially equipped with two telephone numbers to receive paid emergency calls from individuals who showed signs of COVID-19.

From tens of thousands of calls a day at the beginning…

Very quickly, this 2-number telephone hotline system was overwhelmed and those who tried in vain to reach the warning unit soon complained via interactive radio broadcasts or social networks. In response to this situation, the Government, with the support of mobile phone companies, set up a helpline, 3535, with more than 47 telephone extensions run mainly by volunteers. These volunteers received about 50,000 emergency calls a day from all over the country. The volunteers were paid a modest fee of about USD10 a day. In reality, the initial feeling of invincibility to the virus that had prevailed in Burkina Faso soon gave way to psychosis after the first COVID-19 related death was announced on 18th March 2020. This death was all the more worrying for the public as it was the first in Sub-Saharan Africa. This was the beginning of the deconstruction of the myth that Africans were resistant to the coronavirus, partly fueled by an African student’s recovery from COVID-19 in China and widely reported in sub-Saharan Africa. Another factor fueling the public’s psychosis was mathematical modelling that predicted an implosion of COVID-19 cases in the country. Suddenly, everyone felt that they were in imminent danger and were encouraged to alert the health services of any symptoms that might resemble COVID-19. This was reflected in the words of one official on the monitoring committee: “We do not sleep here anymore. We work 24/7. “

…to a sudden drop in the number of calls, coupled with threats and insults to call centre operators

About one month after the index case in Burkina Faso, the call centre began to record a significant drop in the number of emergency calls. From an initial 50,000 calls per day, operators were now receiving only 14,000 as at mid-April. This trend has not been reversed since then, down to between 1,000 and 4,000 calls per day by August 2020. Alongside the drop in the number of calls received, call centre operators were recording more and more calls with ulterior motives, often accompanied by threats and insults against them. “There are people calling and threatening to come and attack and beat us up,” said one call centre manager. On 17th June 2020, out of 9,052 calls received from all regions of the country by the call centre operators, only 6 were directly related to the disease, the rest were threats or insults to the operators, or complaints to the authorities.

These are many reasons that led to the decline in the number of calls. First of all, there was the public’s dissatisfaction with the services provided by the call centre. In fact, most of the operators working in the call centre were volunteers who, initially, had received no training on how to communicate effectively with the population on the symptoms of the disease, the rumors surrounding it or the concerns it raises. In addition, many users of the 3535-helpline complained that they had waited in vain for the promised visit by the investigation team, or had tried unsuccessfully to reach someone on the call centre line. This may have resulted in poor communication and frustration for some callers, and the resulting “bad publicity” may have discouraged many from calling the 3535-helpline.

In addition, the government’s communication on the management of the epidemic was flawed, leading to a flurry of false rumors which discredited the government’s actions. As one member of the government acknowledged, “There have indeed been some mistakes and failures”. In addition, the measures taken by the Government to limit the spread of the disease, including the closure of air and land borders, markets, places of worship; curfews and quarantine of towns affected by the disease exacerbated the financial difficulties of households without a stable income and living from hand-to-mouth. For many, “it’s better to go out and get the coronavirus with the chance of getting cured, than to stay at home and die of hunger for sure” – meaning that they were no longer really thinking about the disease. Worse, “fake news” ended up driving the national opinion that the disease did not exist in Burkina Faso. Others even ended up seeing COVID-19 as a “government conspiracy” to attract funding from international donors and generous donations at the national level. In such an atmosphere, there was a sense of mistrust and the 3535-helpline was therefore used less and less by the population.

Public mistrust was made worse by the statements made by some patients suffering from COVID-19 or their relatives about the poor quality of hospital care. They denounced, among other things, the poor quality of meals, the absence of or poor condition of toilets, and hospital wards that looked like “prisons”. These dissuasive testimonies also included the refusal of health care staff to admit people accompanying patients to hospital, failure to return bodies to families in the event of death, and poor communication between health care staff and patients’ families about the treatment of the illness. Families publicly claimed that their relatives died in hospital because of medical errors and/or delays in care.

Finally, it is important to underline the impact of stigmatization. Indeed, people with COVID-19 reported being stigmatized in their communities. Even after recovery, their neighbors or workmates often avoided them, even if this was sometimes implicit. This would have led some people to hide their symptoms and avoid calling the helpline for fear of being declared positive and being stigmatized.

How to improve the effectiveness of the helpline

The helpline is an important communication source through which the public can access information on COVID-19. It is also the primary means of alerting the public about suspicious and contact cases. To optimize its effectiveness, good investments should be made in the implementation of the helpline program including (i) Disease communication, (ii) Recruitment, training and motivation of call centre operators, and (iii) Provision of call centre equipment.

Indeed, investing in crisis communication taking into account socio-cultural aspects is crucial to improve the culture of trust between the public and the health system, especially between patients and caregivers. Such an investment would also facilitate the acceptance of the information given by the government to the population. This would then strengthen the quality of patient care, limit the spread of false rumours and the stigmatization of those affected and, ultimately, promote the attractiveness of the helpline.

Call centre operators should also be trained well in advance on how to communicate effectively with the helpline users. Indeed, people who call in an emergency context are often worried and need to have their concerns listened to in an attentive, knowledgeable and compassionate manner. In addition, it is important to recruit an adequate number of operators and to motivate them sufficiently to cope with the high flow of calls and the resulting workload.

Finally, investments should be made in call centre equipment, including the acquisition of a sufficient number of telephone sets. Better still, call centres should be spread throughout the country (decentralization) to reduce pressure on the only centre in the capital. This would encourage people to call the helpline for information or to provide alerts in the event of symptoms suggestive of the disease or contact with a sick person. It is also through this that the Ministry of Health would be better equipped to deal with potential future health emergencies requiring the use of a helpline.

Orokia Sory is a research assistant at RESADE (Ouagadougou, Burkina Faso). She is a macro-economist by training and an expert in public health, specifically health policies and systems.

Yamba Kafando is a health geographer, expert in health financing, health policy and systems analysis. He is currently Director of Operations and Researcher at RESADE.


Charlemagne Tapsoba is a researcher at the Centre de Recherche en Santé in Nouna (Burkina Faso) and an associate researcher at RESADE (Ouagadougou, Burkina Faso). His main field of interest is health policy and systems research. He has conducted several studies in the field of strategic purchasing.

Issa Kaboré is a medical doctor and research assistant at Recherche pour la Santé et le Développement (RESADE) (Ouagadougou, Burkina Faso). He was a front-line worker in the fight against COVID-19 in Burkina Faso.

Joël Arthur Kiendrébéogo is a doctor, health economist, lecturer at the Joseph Ki-Zerbo University and associate researcher at RESADE (Ouagadougou, Burkina Faso). He is currently doing a PhD thesis in public health at the Institute of Tropical Medicine (ITM) in Anvers (Belgium) and the University of Heidelberg (Germany) on learning processes in health financing policies and, more specifically, strategic purchasing in Burkina Faso’s health sector.

Strategic Investments in Communication Improve the Fight Against COVID-19: The Case of the 3535 Helpline in Burkina Faso